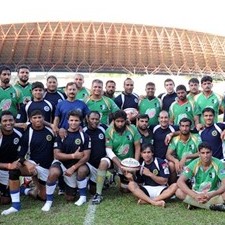 Rugby in Pakistan has received a huge boost with the announcement that a national club Fifteens league has been established to serve the burgeoning interest that exists in the Game there.

The league consists of 20 teams playing across a number of divisions with the winners being crowned Premier Champions. This first-ever formal club league in Pakistan represents another stage in the ongoing development of Rugby in Pakistan, which has been competing in the HSBC Asian 5 Nations and other regional tournaments for some time.

IRB Chairman Bernard Lapasset said: “The news that another of our Member Unions has established a league with a robust structure is very heartening for us. An important aspect of the IRB’s work is to develop the Game, bring it to new territories and then continue to strengthen it where it already exists. This news is a huge boost for Rugby in Pakistan and, more broadly, for Asia.”

“Asian Rugby is on the rise. The HSBC Asian 5 Nations tournament is going from strength to strength and we have seen the emergence of a number of relatively new teams which are challenging the traditional order. The fact that Rugby World Cup 2019 is taking place in Japan is another milestone for the Game in Asia and will benefit Rugby at all levels throughout the region.”

An independent study highlights an 18 per cent increase in participation rates in Asia since Rugby World Cup 2007. The reasons for that growth have been attributed to the growing profile and success of Rugby World Cup, the IRB’s investment strategy and also Rugby's re-introduction into the Olympic Games from 2016.

The IRB will invest GBP9 million into the development of Rugby in Asia between 2009-12. There has already been a significant uplift in China, where Rugby is played in schools, Sri Lanka and India as well as Japan, where the Game already has a rich history.

President of Pakistan Rugby Union Fawzi Khawaja said: “The establishment of this exciting competition is another step forward for Rugby in Pakistan. It will give certainty around how the game is played at domestic level, it will give real context to the Game at club level and will make talent identification easier as we seek to bolster the strength of our national side.”

“The Pakistan Rugby Union is serious about improving the quality and popularity of the sport here and we see this competition as another step along the way to making Pakistan a force to be reckoned with on the international stage.”

The Pakistan Rugby Union (PRU) was established in 2000 and is a Full Member of the Asian Rugby Football Union and IRB. In this short time the Game has spread quickly and it is now played in all provinces of the country, making it one of the fastest growing sports in Pakistan with Rugby Sevens already a medal event at the National Games.

The Game itself in Pakistan dates back more than 80 years with the first club, Karachi RFC, being founded in 1926. The game remained exclusively an expatriate sport, with Karachi being active on the All-India circuit up until the late 1950s. The 1960s saw a decrease in the expatriate population and, with travel to India becoming more restricted, the club became more reliant on playing fixtures against visiting British military units, particularly teams from ships of the Royal Navy.

Following a period of decline, the game was rejuvenated in the 1990s through a combination of Rugby-loving expatriates and, crucially, a sizable local community keen to find out more about this great Game.

The three major clubs in Pakistan, based in the cities of Lahore, Islamabad and Karachi, initiated an annual Pakistan Sevens Championship on a rotating basis and the Pakistan Rugby Union was formally established in 2000 and soon gained membership with the Asian Rugby Football Union. In 2003, Pakistan fielded a national Fifteens team for the first time, participating in a provincial tournament in Sri Lanka.

The PRU then became an Associate Member of the IRB in November 2003 and a Full Member the year after. In Nov of 2004, it participated in the 19th Asian Championship in Hong Kong and in December 2005 it hosted the Asian Under 19 Championship at Lahore with 11 countries participating. This also served as the Asian qualifying round for the IRB Under-19 Rugby World Cup 2006 in Dubai.

Since then Rugby has really taken off. Supported by ARFU and the IRB, it has now been introduced at provincial and district level by the PRU while schools have also been targeted so that hundreds of thousands of boys and girls will experience the fun and camaraderie of playing the Game. There are now more than 3,000 players active in the country and at the top level, the national team that participated in the HSBC Asian 5 Nations 2012 was coached by former Ulster and Ireland prop forward Justin Fitzpatrick.