In 1913, Pierre de Coubertin designed one of the world's most famous symbols Courtesy International Olympic Committee Back To Main

The Olympic rings represent the five continents and all nations united by Olympism. Today, they make up of the most famous and recognised symbols in the world. Did you know that it was a mere 20 years after the re-establishment of the Olympic Games that Pierre de Coubertin presented his emblem to the 1914 Olympic Congress in Paris? While he is remembered for being an educator, historian and founder of the International Olympic Committee (IOC), he was also a talented designer. Read on for the full history of the Olympic rings. 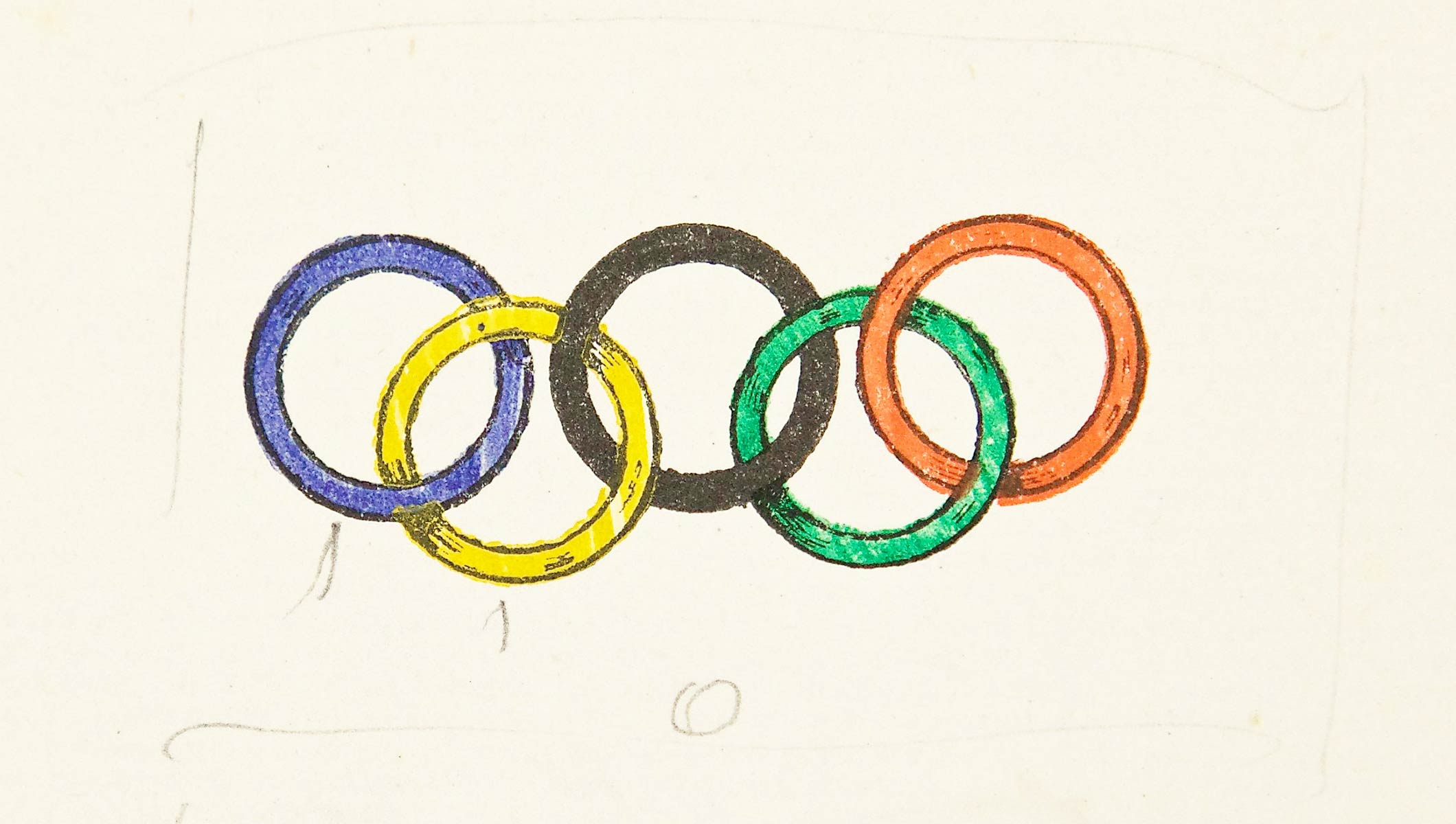 The Olympic motto "Citius, Altius, Fortius", which is Latin for "Faster, Higher, Stronger", was proposed to Pierre de Coubertin by Dominican priest Henri Didon. While this was used at the founding Congress of the IOC calling for the re-establishment of the Games on 23 June 1894, the famous symbol of five interlaced rings appeared only two decades later. Previously, Pierre de Coubertin had designed an emblem depicting an open crown made up of olive branches, reminiscent of the prizes awarded to athletes during the ancient Games. This symbol appeared on the official letterhead.

The introduction of an Olympic flag was discussed by the IOC members in 1910 at their 12th Session in Luxembourg. One of the organisers of the Olympic Games London 1908 and author of the official report, British IOC member Theodore Cook, presented designs for a flag and medals, but they were not accepted. A commission was subsequently set up, but its work did not produce any concrete results.

In 1913, Pierre de Coubertin set to work. He conceptualised a symbol that would be as universal as possible. His design of five interlaced rings was likely inspired by the logo of the USFSA (Union of French Athletic Sports Societies), an organisation in which he had served as Secretary General in the 1890s. Born from the merger of two sports clubs, the USFSA created a badge depicting two interlaced rings.

The Olympic symbol first appeared on his letterhead in July 1913 during preparations for "the 20th anniversary celebrations for the re-establishment of the Olympic Games", which were scheduled to take place at the Congress of the National Olympic Committees in Paris in June 1914. Pierre de Coubertin presented the rings in an in-depth article in the Olympic magazine entitled "The 1914 Symbol and Flag".

"The emblem chosen to showcase and represent the 1914 World Congress is the final step in the Olympic revival. It has begun to appear on various preliminary documents," he stated. "Five equal, interlocking rings coloured blue, yellow, black, green and red stand out against a white background. Moreover, these six colours can be combined to represent all national colours, without exception: Sweden's blue and yellow; Greece's blue and white; the tricolours of France, Great Britain, America, Germany, Belgium, Italy, and Hungary. Spain's yellow and red stand alongside newer nations like Brazil and Australia, as well as ancient Japan and young China," he commented at the time. He also explained that his "highly symbolic" flag represented "the five continents united by Olympism and the colours of all nations".

He continued: "It is truly an international symbol. It is extremely well-suited for a flag and the aesthetics will be perfect. Such a flag will be light, shimmering and spiritual when seen waving in the wind. It has a substantial symbolic significance. Its success is guaranteed. So much so that it could continue to be used and worn during Olympic occasions even after the Congress. In any event, the 1914 celebrations now have the appropriate eurythmic messengers to promote them. The first copies of a large poster were given to the National Olympic Committees and remain at their disposal. It immediately garnered widespread admiration. Smaller formats. It is equally successful on postcards. The five rings are suitable for a wide array of uses.”

Pierre de Coubertin had 500 Olympic banners made for the Congress in Paris. In April 1914, he entrusted his five-ringed flag to Egyptian IOC member Angelo Bolanaki, who presented it at the inauguration of the Chatby stadium in Alexandria. Then, at the opening ceremony of the Olympic Congress on 15 June 1914, the flag was officially flown for the first time at the entrance to the Sorbonne. It was displayed everywhere during the 20th anniversary celebrations.

But Pierre de Coubertin was perhaps lacking in faith when he so eloquently wrote, "Are these five rings securely bound to each other? Will war one day risk breaking the Olympic framework?" In fact, on 28 June 1914, during the same month as the Olympic Congress in Paris, Archduke Franz Ferdinand of Austria and his wife were assassinated in Sarajevo, triggering the start of World War I. The Games planned for Berlin in 1916 could not be held, and the presentation of the Olympic rings to a wider international audience was thus postponed.

After the conflict ended, and in tribute to the heavy toll paid by Belgium, Antwerp was named as the organiser of the Games on 5 April 1919 in Lausanne, Switzerland, where Pierre de Coubertin had set up the IOC’s headquarters. In a devastated Europe, this great sporting event took place under the sign of peace. The Olympic flag was debuted in the large Flemish city's new stadium during the Opening Ceremony of the Games of the VII Olympiad on 14 August 1920. It would continue to be flown in the Olympic Stadium until the last day of the Games on 12 September 1920, during a Closing Ceremony that featured a speech by Pierre de Coubertin and a cantata performed by 1,200 choir members and musicians.

The Olympic flag was then sent to Paris, which organised the Games in 1924. The Olympic visual identity was born — and it has only strengthened over time, becoming one the most famous and recognised brands in the world today!

Owned by the IOC, the symbol is now governed by Rule 8 of the Olympic Charter, which states: "The Olympic symbol consists of five interlaced rings of equal dimensions (the Olympic rings), used alone, in one or in five different colours. When used in its five-colour version, these colours shall be, from left to right, blue, yellow, black, green and red. The rings are interlaced from left to right; the blue, black and red rings are situated at the top; the yellow and green rings at the bottom. The Olympic symbol expresses the activity of the Olympic Movement and represents the union of the five continents and the meeting of athletes from throughout the world at the Olympic Games."