Tunisia a class act in Rashid Volleyball Back To Main

Telling blows at the net, the solid defensive walls and receiving, coupled with the depth in the reserve line, have been the hallmarks of Tunisia’s show at this year’s Rashid International Volleyball Championships in Dubai. 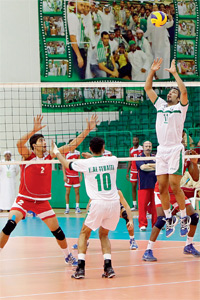 Table leaders in the single round robin league of the 14th chapter of the longest standing international team event in the UAE, Tunisia, who finished 11th at the London Olympics are here without three of their Olympians. The remaining outings against Indonesia and the UAE in Rounds 4 and 5 make their task of claiming the trophy a lot easier in Dubai this year.

“For us this is a preparatory leg before our Arab championships in Bahrain in November this year,” said their veteran coach Fethi Mkaouer during a short talk with the Khaleej Times.

“We have fared well coming out of difficult and very tight situations despite being a trial run combination. We are more than pleased with the outcome so far,” he added.

Thailand and Indonesia have shown us the rising volleyball powers they are in Asia with a type of game that adds to the speed elements of the fast paced modern approach. Their workouts are dotted with blinding smashes and great digging work during the rallies and when receiving service.

“We have been a fast improving side for the past five to six years and have the consistency levels needed to survive on the international stage in Asia where the established teams are taking notice of us,” said the cucumber cool Thai coach Monchai Suprajirakul.

What’s interesting about the Thais and the Indonesians is the attitude of the players and the support staff even during the tense moments of a game.

Win or lose, they shrug it off with a smile and there is no long faces when refereeing decisions, mistakes and bad luck come in their way. To this aspect, Suprajirakul simply laughs it off. “We do not make an issue out of anything. Getting on the game without fuss should be part of sport. Nothing big,” he added.

Volleyball comes a distant third behind the national passions of badminton and soccer in Indonesia, and the non contact net sport has come a long way after the initial series of friendlies against developmental Australian and other visiting sides, and the appearances in the South East Asian Games during the late 90s.

Indonesia’s assistant coach and team spokesperson, Sigit Ari Wododo, is candid and modest about his team’s show so far.

“We played well to stun Thailand in Round 1 but we have no excuses for the mistakes we kept committing even when the odds were not against us in the second and third matches,” Wododo said immediately the stunning victory against the strong Thais, “We were just lucky against Thailand. Just managed to capitalise on the breaks we got unexpectedly.”

Excepting for Tunisia, Saudi Arabia and the UAE, all the other sides have a two-win, one loss record in the league.

The Tunisians have a clean slate maintained (3-0) while the winless UAE though improving fast, have a 0-3 standing. The Saudis have won one and lost two.

Round 4 and 5 will prove crucial for Thailand and Indonesia. Thailand have matches against Pakistan and Saudi Arabia while Indonesia run into Tunisia and Pakistan.

Pakistan have the required incredients to upstage the Thais in the run-up to the runners-up berth. Like the rest of the field, they too have come here with a young makeshift side with hardly 10 days of pre-event training in Islamabad.

“The players are all young and I am not too concerned about the points situation. I think my boys have done exceedingly well considering the lack of international exposure except for three senior players,” said Pakistani coach Hussain Hassan Mazahar.